ACME. is pleased to present Amino Acids, an exhibition curated by Danish gallerist Marie Kirkegaard that focuses on fauna, process, material manipulation and destruction as a creative tool. The show features new works by three artists: Anders Brinch, Silas Inoue, and John Knuth, who each in their own practice share an interest in the natural world and its potential in the process of art making.

Anders Brinch (Danish, b. 1971) is working within a painterly practice where he often uses the significance and the attraction of accumulative aesthetics. For the exhibition, Brinch presents two bodies of work. The first is the Dirt Soup Paintings, which is a series of canvases of varying sizes, painted in shades of green and brown oil, residing between abstract and figurative painting. After the canvases were finished, Brinch submerged them into “Peblinge Søen”, one of Copenhagen’s famous historical city lakes. Submerged there for many days, the paintings were affected by nature, water, algae, etc. diminishing some of the artist’s marks and adding some new marks. Also included in the show are four large paintings made in a more traditional method, depicting vibrant organic and cosmic landscapes. In addition to the paintings is a sculptural piece consisting of a standing frame with ceramic coconuts, eggs, and mirror balls hanging like pearls or some kind of unknown DNA code.

Silas Inoue’s (Danish, b. 1981) works evolves around themes such as time and distribution of life. In this exhibition, he presents works infected by different types of mold. By establishing ideal living conditions for the fungus, he explores the painterly properties of molds and gives artistic authorship to the unpredictability of these highly invasive organisms. The works are hermetically sealed in transparent acrylic frames, which partly provide the opportunity to observe the organisms safe from the hazardous spores of the mold, and serve as the framework of a kind of living paintings to be mounted on the wall. Inoue’s internet-based video work World Pop Drummer draws a dark, yet humoristic parallel to the invasive properties of mold. In the work, a demonic creature is drumming in an offbeat rhythm, the rhythm is actually based on statistics from the UN and the Population Reference Bureau of the increasing world population, calculated by deducting the birthrate from the significantly lower death rate – meaning that every drum hit represents an additional human life on the planet. In World Pop Drummer, Silas Inoue has collaborated with animator Ben Wheele and programmer Magnus Moar. In another work titled Hydra, a sculpture made of sugar depicts a Hydra organism; in nature, the Hydra has the special ability of being able to fully regenerate itself, making it one of the few living beings which is actually immortal. Inoue’s works for the show touches upon the vast properties of life – our wish to preserve it and the unavoidable decay that lies programmed within organic entities, from the smallest mold particles to the largest invasive species.

John Knuth’s (American, 1978) multifaceted work explores themes of transcendence through material manipulation. Knuth’s work often focuses on themes of survival, and in this show he will be showing a new series of paintings that uses thermal blankets as a material for his compositions. Knuth grommets many layers of reflective silver and red thermal blankets together and then starts to cut and burn the material to create landscapes that echo the San Gabriel Mountains, the recent images from the Mars rover or the beginning of time. The delicate burn marks on the compositions give a sense that the landscapes are being bombarded by a meteor shower. Knuth will also be displaying a new series of sandbag sculptures made from the same reflective material. These sculptures resemble half built walls or breakwaters constructed from sandbags made of highly reflective Mylar. In a beautifully simple way his sculptures utilize the language of both hope and disaster. The sandbag stands in for the human labor trying to keep the sea at bay while also invoking the idea of a bunker or home being built. In their half finished stance, they are caught between constructing the future and collapsing under the weight of the past. Entropy is at the heart of them. The Mylar surface of the bags reflect the space they are in and also that of the viewer, making for an uneasy sense of complicity in their existence.

The exhibition presents works that aim to go beyond itself, and due to its material focus interact directly with their surrounding physical ecosystem. The diverse biological machinery becomes an art-making tool that turns a natural process into something beautiful. Thus, the works, which are made specifically for the exhibition, provide a framework for the physical meeting between three artists’ explorations of the tensions between the controlled environment of the studio based work and the inherently unpredictable mark-making of the ecosystem.

Shana Nys Dambrot: Amino Acids and All the Flowers. ACME, In.: Art and Cake 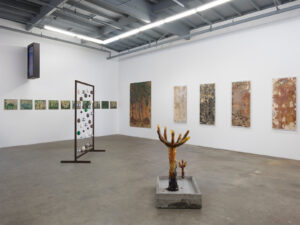 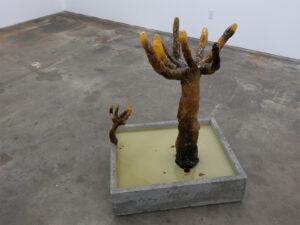 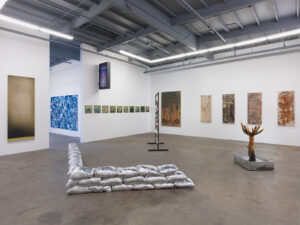 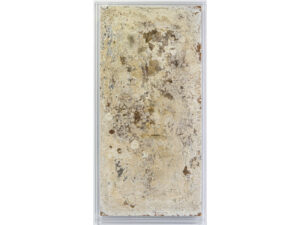 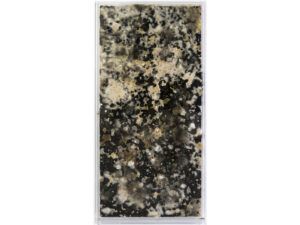 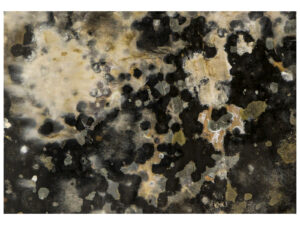 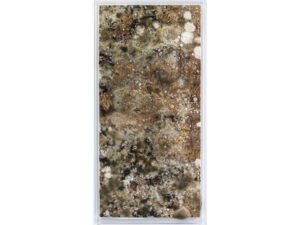 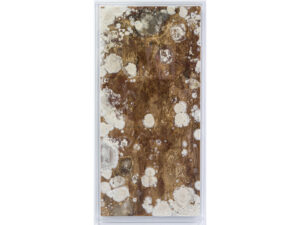 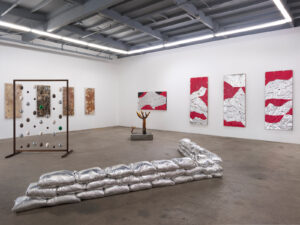 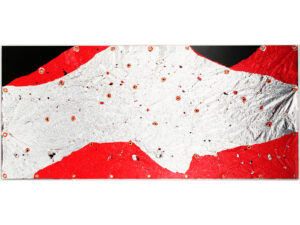 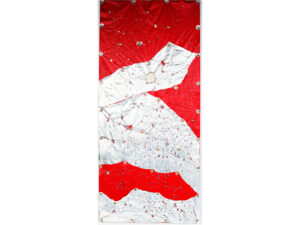 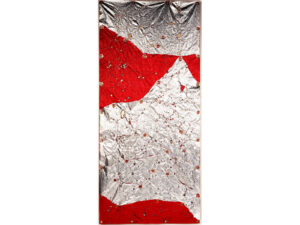 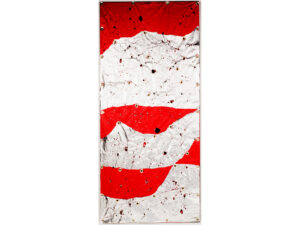 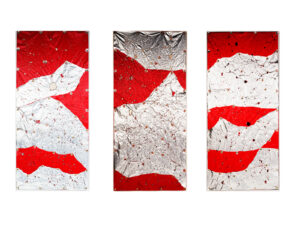 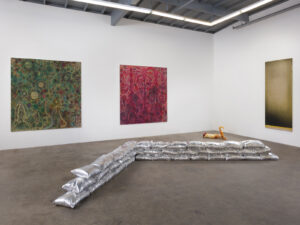 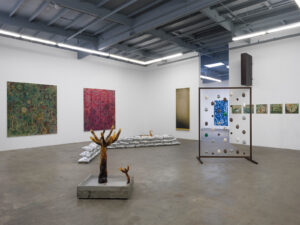 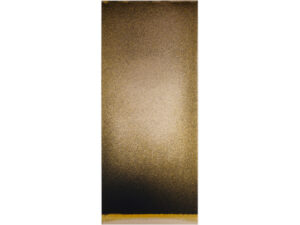 Anders Brinch I Grapes and Coconuts 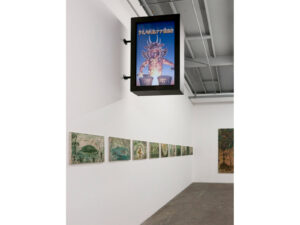 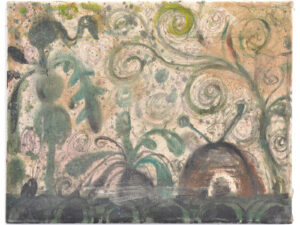 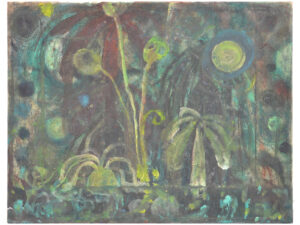 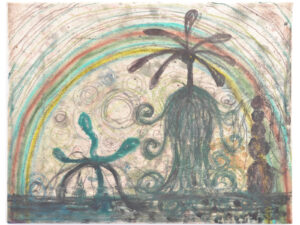 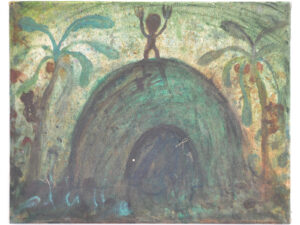 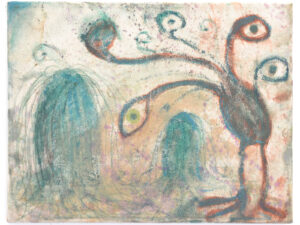 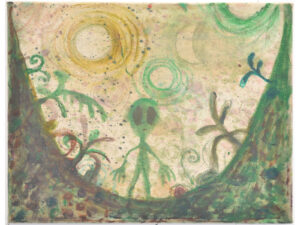 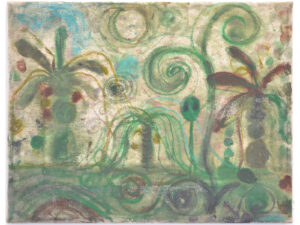 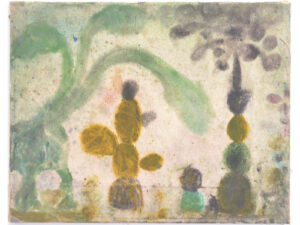 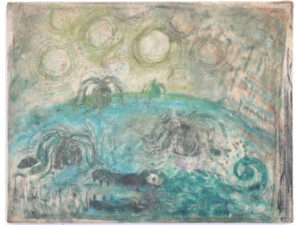 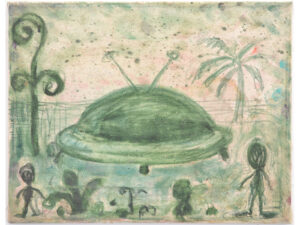