Group shows can be a chaotic affair where the participating artists and their works takes and gives terrain. This exhibition will try to embrace this impact, by taking its point in the expression of the pogo dance. Though the works in the exhibition do not necessarily address the pogo as phenomenon, perhaps rather in a metaphorical sense and analogous to art understood as a collective sphere of energy, where you constructively go crazy with all attitudes and feelings. If not more, it will be between the clashes of the works, and their quest for attention, this exhibition will hopefully culminate in an energetic and generous pogo dance.

Pogo (dance) from Wikipedia:
Pogo dancing is most associated with punk rock, and is a precursor to moshing. The basic steps allow for a variety of interpretations, some of which might appear quite violent. Occasionally, dancers collide, but this is not necessarily part of pogo dancing. An uninformed bystander might get the impression that the dancers are attacking one another. People sometimes get injured when pogoing, but, more often than not, pogoers who fall to the ground are helped up instead of getting trampled. There is a general understanding that the pogoing is fun, not a fight. 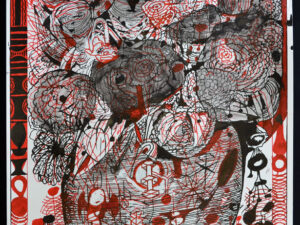